Maps have always been a powerful way of  highlighting London’s social inequalities (Charles Booth‘s and John Snow‘s are the most iconic examples of this) and they continue to show how the richest and poorest Londoners often live side by side.  As the BBC’s “The Secret History of Our Streets” has demonstrated, stark inequalities in the wealth and health of Londoners have existed for centuries and, sadly, persist to the present day. A popular way of describing some of the inequalities is to use the analogy that a year in life expectancy is lost for every station eastbound on the Jubilee Line between Westminster and Canning Town. Since first hearing this a few years ago I have wanted to make a map for the rest of the Transport for London network. I have finally done this and you can view the interactive version here and read a more in depth article in the journal Environment and Planning A.
The map shows two key statistics: 1) the life expectancy at birth of those living around each London Underground, London Overground and Docklands Light Railway (DLR) station and 2) the rank of each London ward on the spectrum of Income Deprivation Affecting Children Index (IDACI). The inclusion of the IDACI rank highlights the linkage between deprivation and life expectancy, which is especially poignant in this context as it demonstrates that, without significant social change (obviously, if the social composition of London changes radically then the life expectancies at each station will change with it), the fates of many children living in the poorest parts of London are seemingly already sealed.

Whilst the average life expectancy predictions show that today’s children are expected to live longer, the range is startling. For the stations mapped, it is over 20 years with those around Star Lane (on the DLR) predicted to live, on average, for 75.3 years in contrast to 96.38 years for those around Oxford Circus. The smaller disparities are no less striking. For example, between Lancaster Gate and Mile End (20 minutes on the Central line) life expectancy decreases by 12 years and crossing the Thames between Pimlico and Vauxhall sees life expectancy drop by 6 years. The stations serving the Olympic Park fair badly and contrast with the Olympic volleyball venue at Earl’s Court whose spectators will be passing through areas with far higher life expectancies and lower child poverty
When designing this map it was my intention to create a memorable impression of the persistent inequalities along (and between) the routes travelled by millions of Londoners each day. I also hope it provides another way of further communicating such inequalities in these uncertain economic times. For more information on these issues Benjamin Hennig and Danny Dorling have written a much more detailed piece on the inequalities in modern London here.
If you want to use the map in any publications please refer to it as: Cheshire, J. 2012. Lives on the Line: Mapping Life Expectancy Along the London Tube Network. Environment and Planning A. 44 (7). Doi: 10.1068/a45341.
You can read an ONS report on Life Expectancy at Birth data here.
Making the Map
The life expectancy data exist for each ward in London. To transfer the ward-level values to each station a circle with a 200m radius was first drawn around them. If this circle overlaps no other wards then that single rounded value is used for the station. If it overlaps multiple wards then an average is used. The 200m radius was a pragmatic way of accounting for the stations bordering two or more wards. It also served to ensure the resulting life expectancy was reflective of the stations surrounding population, rather than a single geographic unit that may differ markedly from its neighbours. All values were rounded for simplicity. There is an option on the interactive map to view the actual ward life expectancies as a base map. The process is shown below. 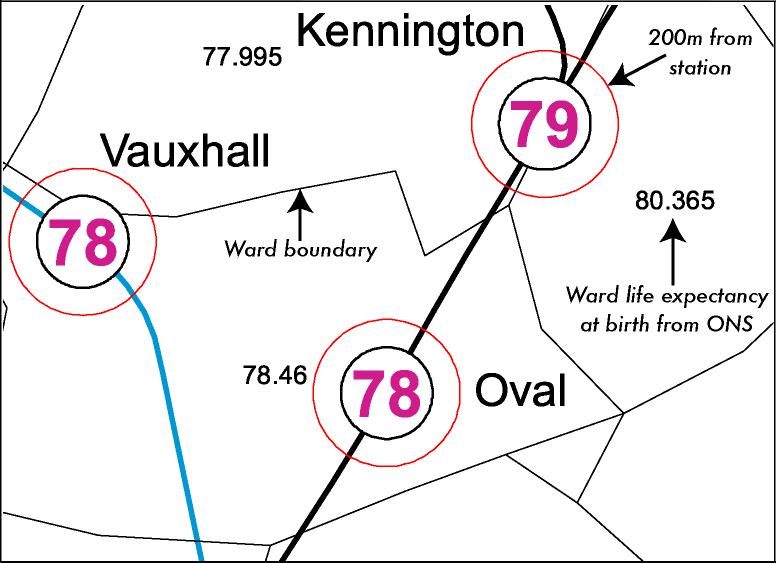